← Abortion
What is Fascism? →

We are living in a time of economic crisis. History indicates to us that this experience will prompt a rise in political and social Nationalism, expressed in discourse and aesthetics. Why this should be is debatable, but it seems reasonably clear that these Nationalist responses to crisis can be grouped into two types (which we might crudely regard as hostile and benevolent): attempts to reject an internal and/or external ‘other’ (however such a group may be conceptualised), on whom our problems can be blamed, and attempts to unite the citizens in pursuit of the nation’s interests.

Exacerbating the growth of ‘benevolent’ nationalism in Austerity Britain this year is the coincidence of a series traditionally patriotic events, with the rugby Six Nations, the European Football Championships, the Queen’s Diamond Jubilee and the Olympics occurring in quick succession (as well as the first flushes of posturing over the referendum on Scottish independence), preceded of course by last year’s Royal Wedding. Union Flag bunting, figured in both sincere and faux-ironic retro deployments, will continue to appear alongside ‘KEEP CALM AND CARRY ON’ variants and commemorative memorabilia of royal events with increasing prominence throughout the early Summer, until clashing awkwardly (perhaps antagonistically) with the first anniversary of last year’s riots in August. British flag designs are currently appearing on an innumerable array of products, sometimes with a wartime, ‘finest hour’ chic and sometimes with post-modern subversions, but more often presented entirely sincerely. To take one example almost at random, Montezuma, a chocolate manufacturer which has traditionally marketed itself on its ethical credentials is now producing a ‘Great British Pudding’ range, “in honour and celebration of being British”, with suitably re-designed packaging.

Though presented as a benign, even apolitical icon, national symbols in daily life denote an often complex set of relationships and assumptions. In understanding the social and political function of these generally harmless images, social psychologist Professor Michael Billig’s notion of the ‘waved’ and ‘unwaved’ flag is useful:

“…one can distinguish between the ways in which national flags are treated. Some are consciously waved and saluted symbols, often accompanied by a pageant of outward emotion. Others – probably the most numerous in the contemporary environment – remain unsaluted and unwaved. They are merely there as symbols, whether on a forecourt or flashed on to a television screen; as such they are given hardly a second glance from day to day.”

To illustrate this distinction in Britain 2012, the flags will be ‘waved’, that is to say they will be consciously deployed as a patriotic or nationalist image explicitly displayed to demonstrate support for the nation, for us to identify with, at times such as Jubilee celebrations, Olympic events and soldiers’ funerals. The flag appears ‘unwaved’, existing as an unremarkable image in the peripheries of every day thought, on chocolate wrappers, bags, clothing, pens and countless other products, adverts, programs etc. Of course, the flag is only one symbol of the nationalist spirit; the essential sentiment appears in many forms, such as this poster from the Chewing Gum Action Group:

At the crux of it, as well as an obvious reference to Olympic athleticism, is the commonly understood idea that everyone belongs to a nation, and that people should go out of their way to contribute to the well being of ‘theirs’. While it is clearly absurd to regard putting chewing gum in the bin as a demonstration of patriotic values, there is a level on which this does make sense to us; we accept the premise of the advert, which suggests that keeping the streets clean will benefit the nation, and what benefits the nation benefits us all, as citizens.

But what purpose do all these little flags and slogans have? One effect is that they create a cumulative sense of national belonging which translates into a vision of ‘patriotic’ responsibilities (beyond such benign instructions as to Keep Britain Tidy’). Consider, to take one of many examples, the response to Len McCluskey’s recent comments about workers disrupting the Olympics with industrial action in protest over their conditions and the wider program of austerity, and the language used by politicians. David Cameron issued a statement, saying:

“‘The Olympics are a great opportunity for this country to show everything that is great about the United Kingdom and advertise ourselves to the world. It is completely unacceptable and unpatriotic what he [McCluskey] is proposing. Most people in this country, including members of that union, think the Olympics is a great occasion for the country and wouldn’t want to see anything happen that would disrupt it in any way.”

Though it barely needs to be pointed out how politically useful nationalism is to Cameron’s political agenda here, it is worth stating explicitly what he is claiming: workers should accept conditions that they are not happy with, because to take industrial action for improvements would be to harm the nation. In this political rhetoric, the interests of Britain are not the interests of the working class but rather the success of a piece of sporting spectacle.

Calling to mind Samuel Johnson’s scathing epithet that ‘patriotism is the last refuge of a scoundrel’, Ed Miliband (the Labour leader, lest we forget), echoed Cameron’s attitude:

“Any threat to the Olympics is totally unacceptable and wrong. This is a celebration for the whole country and must not be disrupted.”

Miliband also caused a minor stir recently when he became an ‘unlikely flag waving champion of British business’, calling for a more prominent ‘Made in Britain’ label on products. His exhortation was odd, though; he did not call for specific action, but rather appealed to a more vague sense of patriotism:

“This is not about a backward-looking Buy British campaign. This is not about making consumers feel bad if they don’t buy products from British business, it’s about something else. We cannot recognise or celebrate our strength in manufacturing unless we know what is designed, invented or made here.”

Miliband is not in a position to demand anything from the public (especially since he does not necessarily buy British himself). He cannot afford to alienate people with specific calls to action, but rather insists on ‘something else’. This ill-defined sentiment that Miliband appeals to is nationalism; the (baseless) idea that we as consumers or citizens should feel some kind of affinity with ‘British’ businesses. It is telling that what Miliband calls for to promote British businesses, rather than a campaign by consumers, is a more prominent symbol – that is, for people to be constantly, subtly, almost subliminally reminded of the ‘Britishness’ of what they buy (and through that to be reminded of the ‘strength’ of the nation). Miliband, perhaps wisely for a nationalist, wants us to understand the products that we buy and use every day through the (relatively arbitrary) prism of nationhood (rather than, say, value, quality, usefulness, environmental impact etc).

What is the ultimate effect of all this nationalism? What is the result of encouraging people to mentally divide things into ‘British’ and ‘not-British’, and of proliferating the Union Flag or other national symbols and slogans? It must be undeniable that one consequence is the rise of ultra-nationalist sentiment on the fringes of accepted patriotism; this emerges as xenophobia, racism and fascism and can be seen in organised groups such as the BNP, the EDL and the Freedom Party. Arguably, these bodies simply push the mainstream discourse of patriotic nationalism to its unsavoury extremes, making overt the implicit subtext of more prosaic, unremarkable forms, and are only able to exist because of the general background of national pride.

This is not the only result of a constantly reproduced sense of nationalism though, and one could make the argument that such a sense is deliberately cultivated. Consider the following posters for BAE Systems and Lockheed Martin, photographed in January at Westminster tube station: 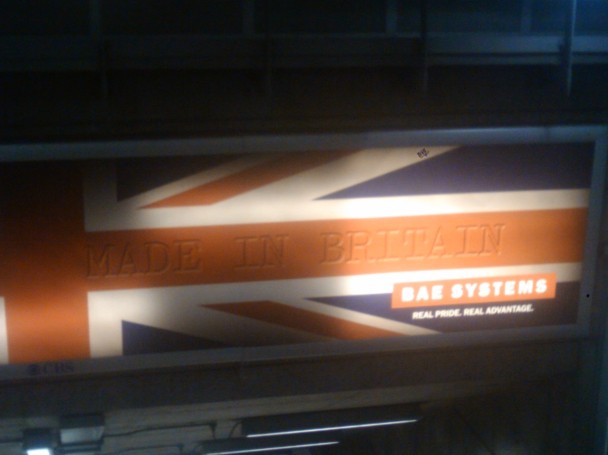 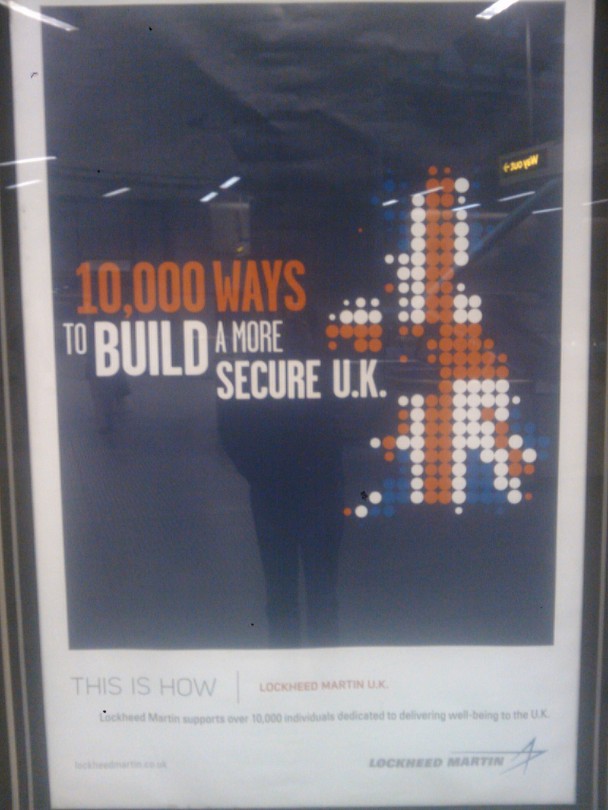 The posters are unremarkable; unobtrusively existing in the periphery of the commuters’ journey, and yet through their use of nationalist symbols they contribute to the constant process by which we are conditioned (and condition ourselves) to identify as British. As the possibility of a war with Iran looms ever closer, it is essential to critically consider the role of national identity in the assertion of state power, and the role of incidental, unremarkable symbols in the assertion of national identity. We do not suggest that there is some Machiavellian conspiracy, from Ed Miliband to the Chewing Gum Action Group, with the intention of setting Britain at war, but rather that the rhetoric of patriotism and national pride which is increasingly underpinning so much of our popular discourse is the same rhetoric that is exploited by fascist groups and governments alike to win support for their cause.

We see, as we watch television and walk around our cities (especially in London), a litany of subtle reminders about our national identity. Though this has long been the case, it has recently risen sharply and continues to rise – whether in the context of austerity restoring our nation or the Olympics enriching it, whether a celebration of monarchist tradition or of capitalist prospects for future growth, the nation (and our role as nationals) is a persistent force in modern life. This nationalism is banal, mundane; it is seldom something we are consciously aware of; and yet it is the same ideological sentiment that leads to mass outpourings of emotion and pageantry. When the British public cheer on an army or a sports team, when they take to the streets in celebration of the Royal family or xenophobic protest, that sentiment does not spring from nowhere. Nationalism exists unnoticed, unremarked on, unchallenged, in a thousand familiar images in a thousand peripheral glimpses in everyone’s daily lives. From time to time the wind will catch the flags, their colours will be proudly waved, and we will see extraordinary eruptions of ultranationalist action.